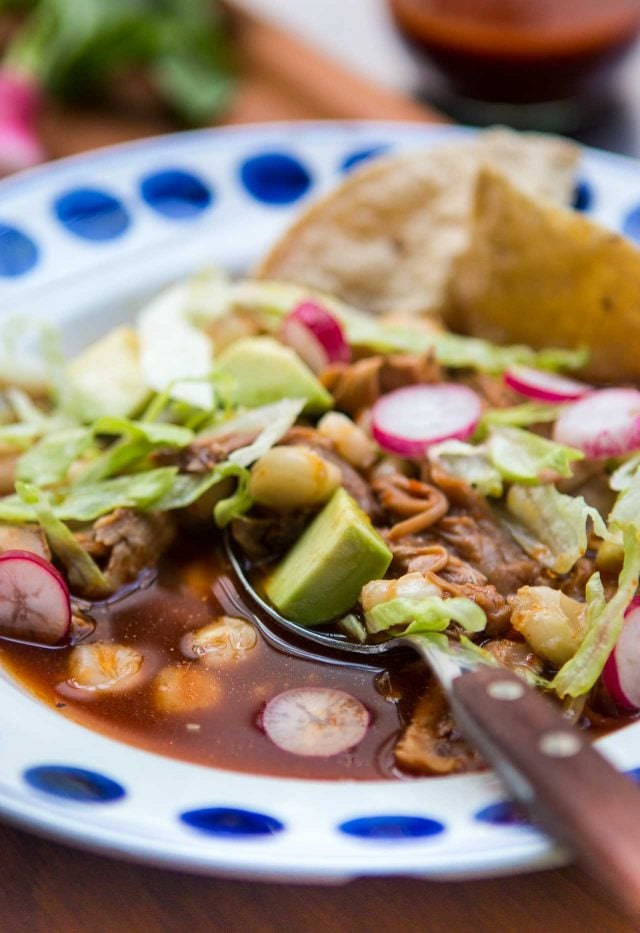 I’m one of those people that doesn’t order soup when I go out to eat. I guess I feel like soup is something that I should be eating at home. While words like “comfort food” and “nourishing” are easy-to-reach descriptions to attach to soup, I try not to overthink it. It just seems like home is the right place to be, to spoon up a bowl of warm broth, a mélange of vegetables, or some sort of purée.

Pozole (or posole) has always been elusive to me, for that reason. It’s on Mexican restaurant menus, but when I got a copy of The Rancho Gordo Pozole Book, since I’m pretty hooked on Rancho Gordo’s outstanding heirloom beans, I got going on making the red chile pozole, which uses hominy, at home. 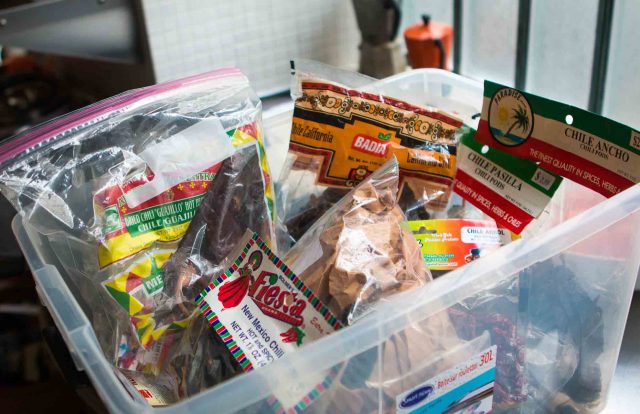 Fortunately, I’ve built up quite a stash of dried chiles chez moi, which I’ve either brought back myself from the States, or that people have brought me from the southwest or Mexico. True, there’s not much use of them in French cuisine, but man (and woman) cannot live by pâté, cassoulet, crêpes, and Brie alone. However I do make good use of them by introducing French friends to Mexican food.

It’s a cuisine that’s not especially well-represented in France, in spite of attempts to colonize Mexico in the 1800s, so people aren’t used to it. (And the flavors and seasonings aren’t necessarily part of the French culinary canon). So guests are intrigued when I make something Mexican, remarking that they weren’t expecting it when I serve something Mexican, but they like it, as long as the spiciness has been tamed. What’s not to like? 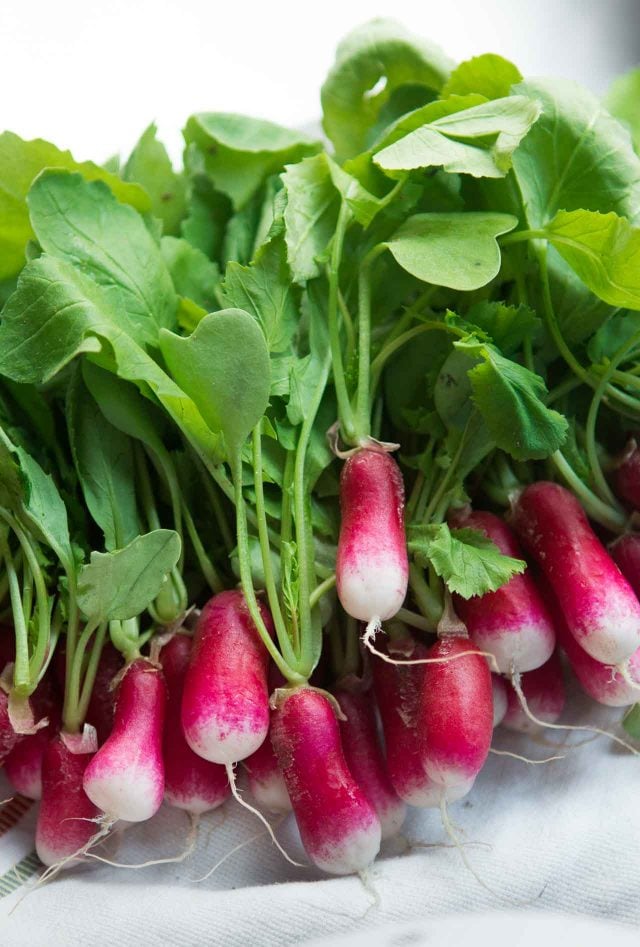 The ingredients for pozole are easy to gather. (Okay, the hominy I brought back from the States, but it’s available at Mexican food shops in France, and I’ve listed some sources at the end of the recipe.) We’ve got an abundance of very good radishes, nice avocados are available, chicken and pork are popular, and yes, you can even find tortilla chips in the salée (or apéro) aisle at many supermarchés, where the savory snacks that meant to be nibbled with drinks are stocked. 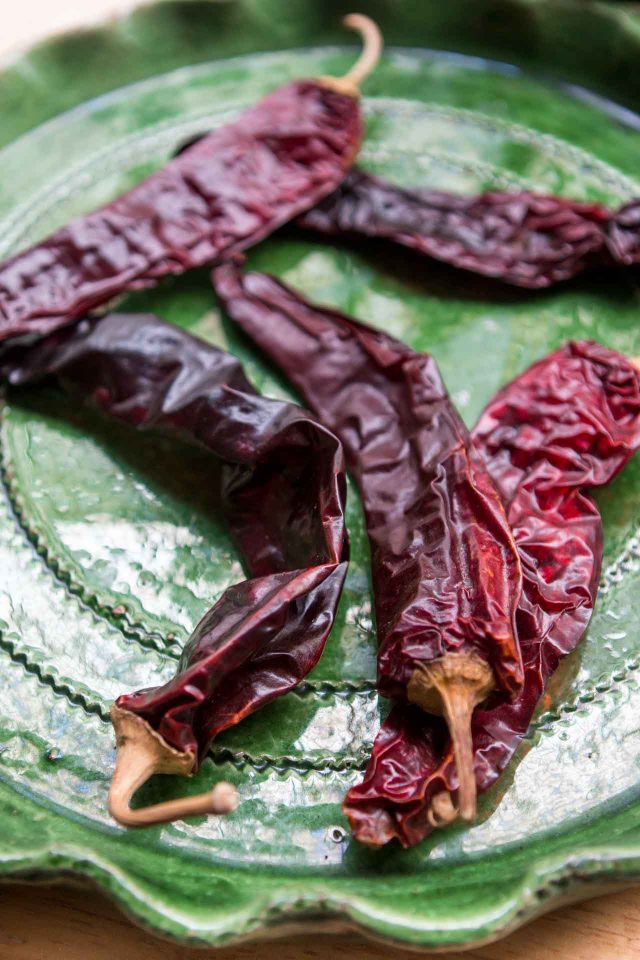 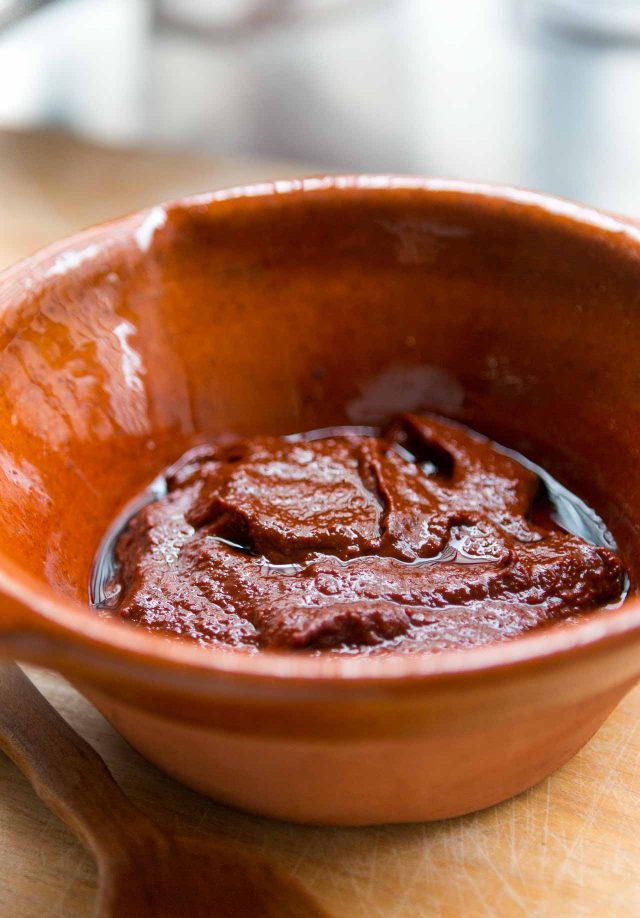 Pozole comes in various flavors and colors. Red and green versions are made, as well as white. Pork or chicken are generally used, although turkey versions are out there, and even vegetarian ones exist as well. (Steve includes nearly twenty different versions in his book.) There was a tempest in a pozole-pot when our beloved contessa added a few extra ingredients to pozole. But as some anthropologists have pointed out, the original meat in pozole was made from, well…let’s just say the unlucky few who were used as sacrifices to the gods. So authenticity isn’t always what it’s cracked up to be.

I will let others figure out how stubbornly they want to stick to tradition, but I will say that no humans were harmed in the making of this pozole. (Except when I made the chile de árbol salsa and after toasting and blending the chiles, I lifted the lid off the blender and made the mistake of inhaling contents. Yowch! My sinuses are still recovering from that one…) But Steve says he’d be proud to serve his pozole to any Mexican grandmother, and my guests were equally pleased. 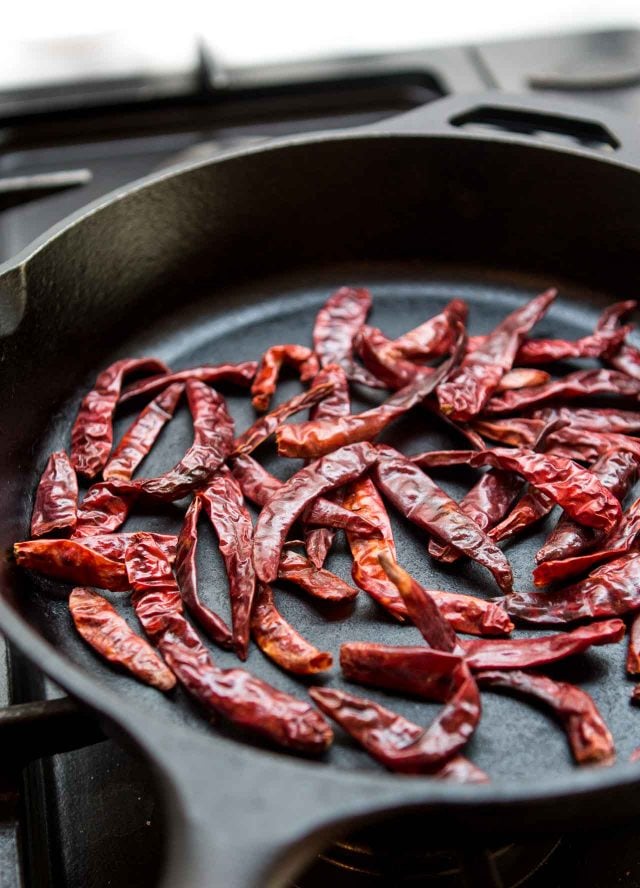 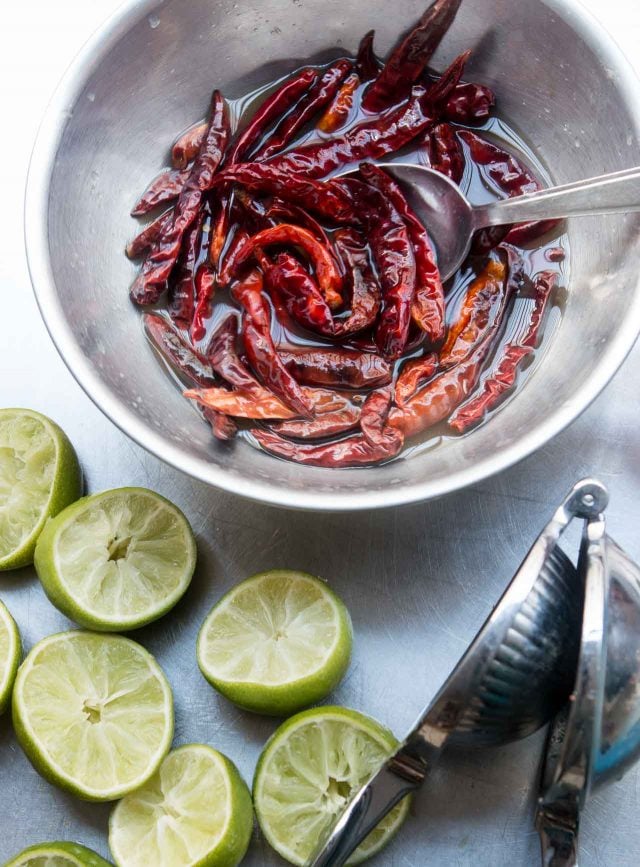 Like other iconic dishes, such as paella and cassoulet, pozole is a bit of a process. If using dried hominy, you’ll need to soak it for several hours or overnight, then simmer it until tender. Canned hominy is available, but since the corn is a prominent ingredient, if you can get your hands on some good dried hominy, you’ll be rewarded, just as I was. 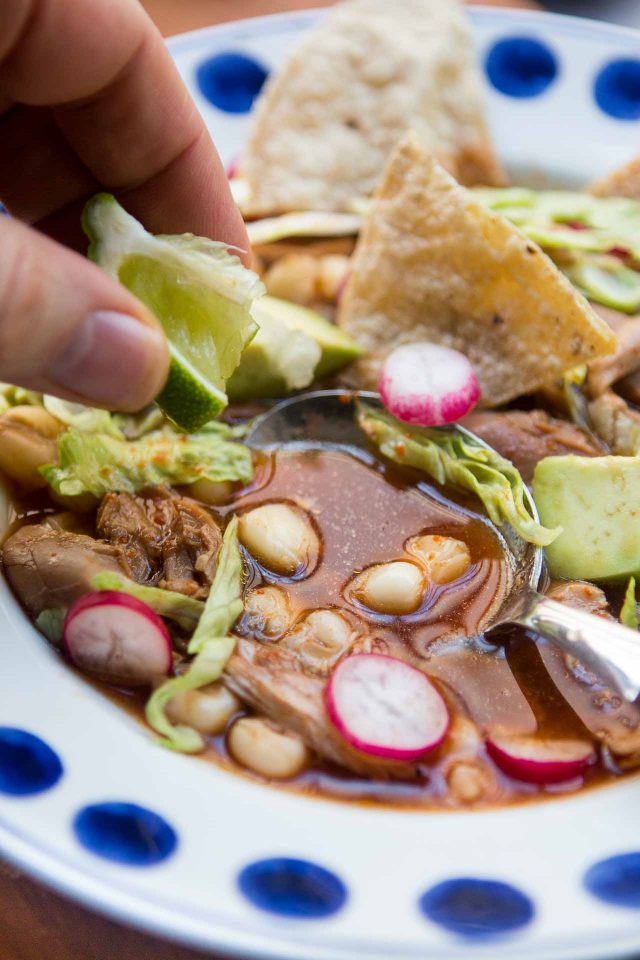 The upside is that you can make the components for pozole over several days. A few days ahead, you can make the red chile paste and refrigerate or even freeze it. The chicken broth is best made in advance and refrigerated; when chilled, it’s easy to skim the fat off. To assemble the pozole, you just simmer the soaked corn (or open the can, if you wish), then incorporate the chile paste, and add the chicken meat and broth. Some even say that the assembled pozole is even better the following day, so feel free the make the whole thing in advance, and – boom – dinner is ready-to-go the next evening.

Another great thing about pozole is, as Steve notes in his book, it’s a one-pot meal. You don’t need to make or serve any other dishes with it, just provide bowls of condiments – radishes, avocados, tortillas, and perhaps a little hot sauce – and let guests help themselves. 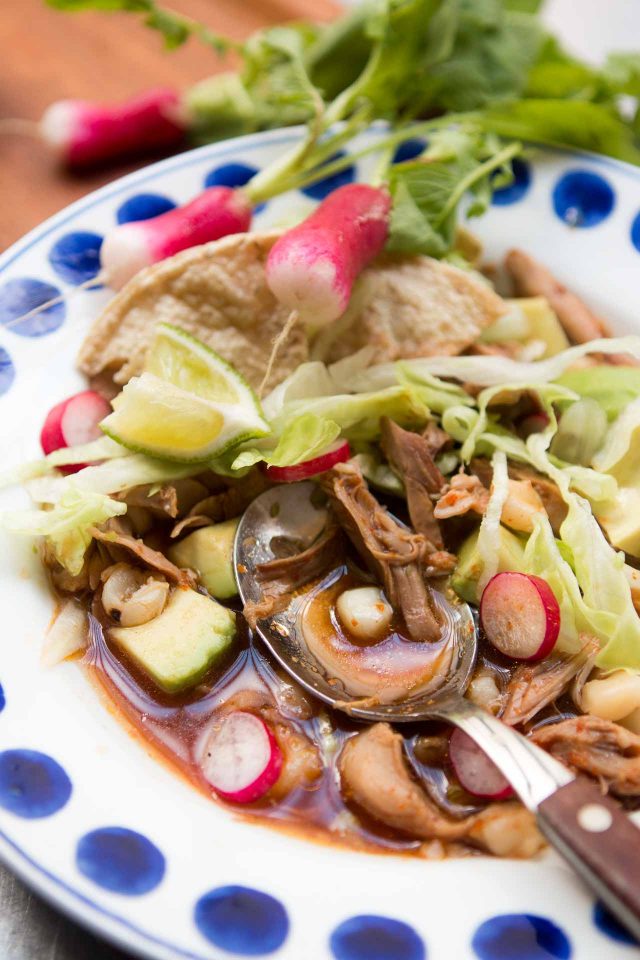 Adapted from The Rancho Gordo Pozole Book by Steve Sando This pozole isn’t especially spicy but if you want to add some zip, the optional salsa at the end of the recipe, made with árbol dried chiles, will definitely do the trick. The árbol chile salsa is very spicy (and pleasantly smokey) but you might want to notify guests not used to eating hot sauce that a little goes a long way. The original recipe in Steve’s book had two chicken feet, chopped, and a chicken back added to enrich the broth. None of the butchers near me had them, so I went with a split pig’s foot to give the soup extra body. You can use either the chicken or pig parts, or skip them. Of course, if serving people that don’t eat pork, omit the pig’s foot. To prepare the hominy, follow the instructions on the package. If using dried hominy, you’ll need to soak it for at least 6 hours or overnight. If you use canned hominy, drain it well and discard the liquid. To serve, offer an array of accompaniments alongside, so people can customize their own bowl of pozole. Sliced radishes, thinly sliced iceberg lettuce, ripe avocado cubes, dried Mexican oregano, finely-chopped white onion, crisp tortilla chips or strips (or chicharrones), chopped cilantro, and cotija cheese, are good garnishes, and definitely provide wedges of fresh lime for people to squeeze the juice into their soup.
For the red chile paste

5-6 cups (875g-1kg) prepared (cooked) hominy, drained (if making it yourself, save the cooking liquid)

1. To make the red chile paste, heat 2 cups (500ml) of water in a saucepan. Remove from heat, cover, and set aside. Cut the dried chiles in half. Heat a heavy-duty skillet over medium heat. Toast the chiles in the skillet, turning them frequently, until fragrant, which will take just a minute or two, depending on how hot the skillet is. (Don’t let them burn.) Place the chiles in the saucepan of warm water, cover, and let stand 15 minutes.

2. Put the chiles in a blender, reserving the liquid, and puree the chiles with the onion and garlic, adding just enough of the reserved liquid to allow the blades of the blender to puree the mixture, scraping down the sides as needed. (I added about 1/2 cup/125ml of the liquid.) Pass the chile puree through a mesh strainer using a flexible spatula, into a bowl, discarding the skins and any errant seeds. Set aside. (The red chile paste can be made in advance, and either refrigerated for several days or frozen.)

3. To make the soup, put the chicken and pig’s foot or chicken feet and back (if using) into a large pot along with the chopped onion, garlic, bay leaves, black peppercorns, and salt. Add 8 to 10 cups water, just enough to just cover the chicken. Bring to a boil, then reduce heat to a steady simmer, partially cover, and let cook for 1 hour.

5. To finish the soup, skim the fat off the surface of the stock. Put the red chile paste in Dutch oven or large soup or stockpot*. Gradually whisk in 6 cups (1,4l) of the stock, then add the chicken meat and hominy. (You can start with the smaller amount of hominy, and add more if you want the soup thicker.) Bring the soup to a near boil. Once hot, taste and add additional salt, if desired. If the soup is too thick, you can add reserved hominy cooking liquid or additional stock.

*The original recipe said to heat 1-2 tablespoons of oil or lard and cook the chile paste down before adding the broth. As you can see from the 5th photo in the post, mine was already quite thick so it didn’t need to be cooked down. If yours is very liquidy, you may wish to.

I’m frequently asked about where to get fresh tortillas in France. In Paris, unfortunately, the place that made fresh tortillas closed down, but you can get Mexican products at Bocamexa and Latino Market. Mail order Mexican ingredients, such as tortillas, hominy, and dried chiles are available in France from Casamex, Los Juanitos, and Mi Tiendita. If you’re in the U.S., top-quality dried hominy is available from Rancho Gordo, which is what I used, which I brought back.

As for the fiery chile de árbol salsa, if you want to make to accompany the pozole, I made Steve’s recipe from his book as a condiment. (You can see the photos of the smaller árbol chiles, being fired up in a skillet, in the post.) The salsa is incredibly spicy but does add a pleasant smokiness in addition to packing a punch. Be sure to make it in a well-ventilated place and don’t inhale deeply when you open the blender! (Take it from me…)

The salsa is made by lightly toasting 1 cup (25g) of dried árbol chiles in a dry skillet. Place the toasted chiles in a bowl with 1/2 cup (125ml) pineapple or apple cider vinegar and the juice of 4 limes. Let hydrate for at least 15 minutes. (Mine didn’t quite hydrate as well as they usually do in warm water, so you may want to warm the vinegar a bit first, or after adding the chiles if they need further softening.) Blend the chiles with 1 teaspoon ground cumin, a pinch of salt, and 2 cloves of peeled garlic in a blender with just enough of the liquid, about 1/4 cup/60ml, to make a puree. Press the mixture through a mesh sieve set over a bowl to remove the skin and seeds. Pour the sauce that’s collected in the bowl into a small jar. Use sparingly. 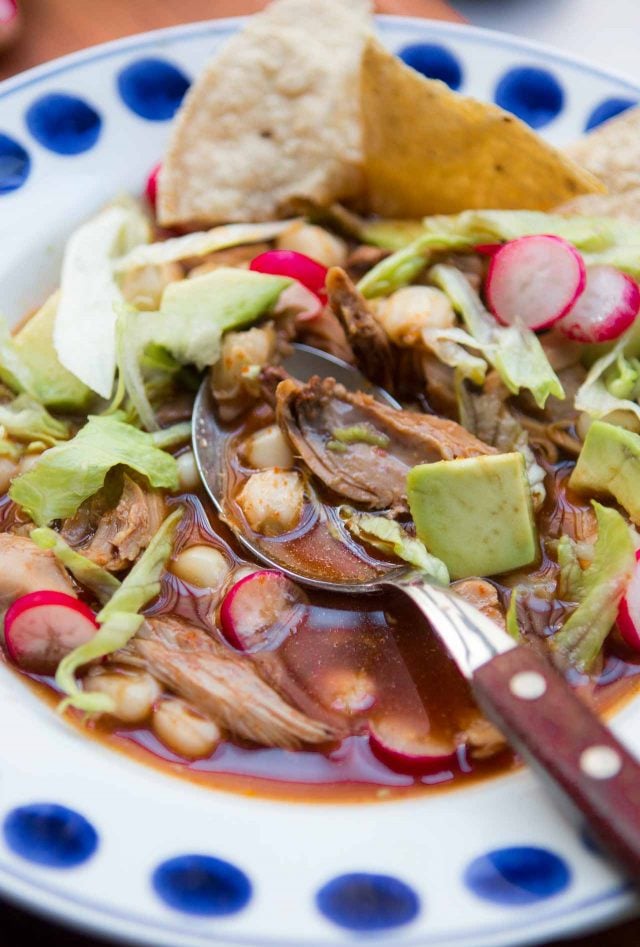 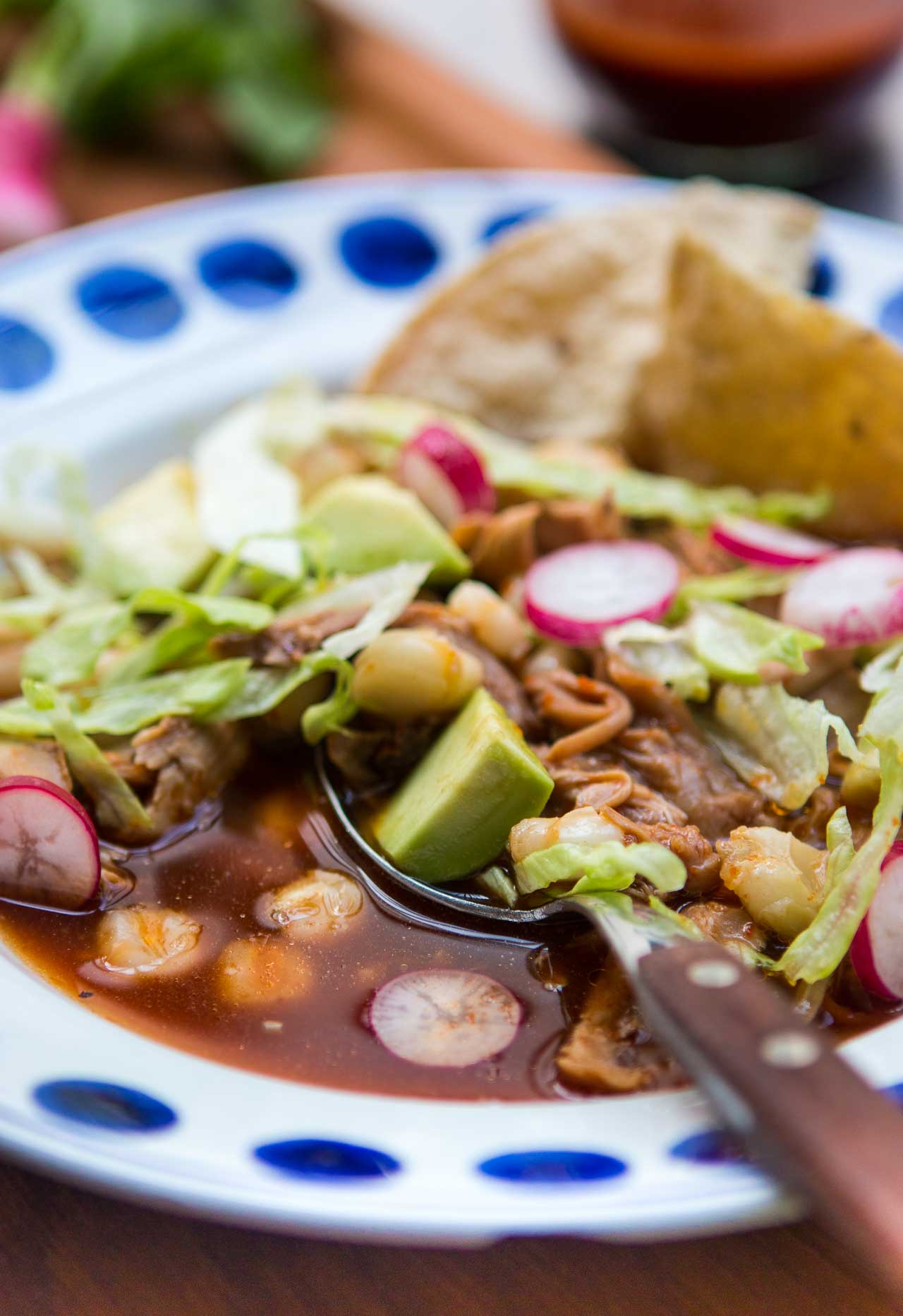